Using AR.js, a JavaScript library for the development of Augmented Reality (AR) content for mobile Web browsers on smart phones with Android or Apple iOS 11 operating systems, AR Web projects inspired by Duchamp’s Portable Museum can be realized today with a set of simple and straightforward development tools. In this session, a demonstration of content developed with AR.js will be shown along with a step-by-step process for creating your own mobile AR Web pages with content triggered by visual markers. Participants will be able to work with examples during the session and should have HTML and CSS development experience. A laptop computer with Web connectivity and HTML editing software, along with a built-in camera, is needed A smart phone is not necessary, but will add to the understanding of the subject. Smart phones must have either recent Android or Apple iOS 11 operating systems. Attendees can also watch and learn without coding. Resources provided will allow for following up on the session content later on.

Marcel Duchamp’s Boite-en-valise, 1938-42, also known as a Portable Museum, were re-made collections of prior works in miniature. Elena Filipovic writes “For Duchamp, reproduction was not ever an affair of practical publicity or dissemination and never a mere mechanical process. Neither was it a simple replica of something but, rather, a displacement—a temporal and perceptional shift.” She continues, “Dissolving distinctions between the real and the illusory, the index and the reconstituted referent, these “items” thus resist fixing the boundaries, properties, and functions of the works on which they are based.” (Filipovic, 2009)

Instead of painting something new, my aim was to reproduce the paintings and objects I liked and collect them in as small a space as possible. I did not know how to go about it. I first thought of a book, but I did not like the idea. Then it occurred to me that it could be a box in which all my works would be collected and mounted like in a small museum, a portable museum, so to speak. (Filipovic, 2009)

Using AR.js, a JavaScript library for the development of augmented reality content for mobile Web browsers on smart phones with Android or Apple iOS 11 operating systems, AR Web projects inspired by the Portable Museum can be realized today with a set of simple and straightforward development tools. AR markers, on paper or displayed on a screen, when viewed through the smart phone camera, can trigger associated 3D model content, both still and animated. Markers can be organized in any manner for the associated mobile AR content.

AR.js allows for efficient displays of 3D content in Web pages tied spatially to AR markers. Attendees who want to learn AR.js need to have basic HTML and CSS coding experience and have some understanding of JavaScript. AR.js is a published library, with examples and documentation online. The A-Frame VR framework is available for making models; 3D models in the glTF 2.0 format can also be used for developers who would rather use existing content or convert content to this format from other 3D models types.

In this session, a step-by-step development process will be demonstrated for creating and/or accessing 3D model content, and authoring Web pages utilizing the AR.js library. The testing of Web pages containing AR content with smart phones and visual markers will also be explained.

Introduction to AR.js and A-Frame

AR.js is an open source JavaScript library developed by Jerome Etienne. Built with ARToolKit.js, a JavaScript port of the ARToolKit SDK (software development kit) (ARToolkit, 2016b), AR.js allows for the development of html Web pages to include AR (augmented reality) content (Etienne, J., 2017c). AR.js requires WebGL (Khronos Group, 2018c), a 3D graphics API (Application Programming Interface) for the HTML5 Canvas element, and WebRTC, a set of browser APIs and protocols that allow for real-time communications of audio, video, and data in Web browsers and native apps (WebRTC, 2017). WebRTC requires encryption, and a Web server configured for https (secure hypertext transfer protocol). WebGL and WebRTC are supported in current Android mobile devices and Apple iPhones with iOS 11. AR.js can be used in conjunction with three.js (Three.js, 2017), a JavaScript library for the development of 3D Web content; and, as demonstrated in this session, AR.js can be used with the A-Frame framework (Etienne, J., 2017a), a JavaScript library for creating Web VR (virtual reality) content (A-Frame, 2015-2017b). Performance on mobile devices is best in Chrome for Android, and Safari for iOS, but other browsers can also be used, such as Firefox. A-Frame is “a powerful entity-component framework that provides a declarative, extensible, and composable structure to three.js” (A-Frame, 2015-2017a). Leveraging features in ARToolKit (ARToolkit5, 2016) and A-Frame, AR.js makes the development of AR for the Web a straightforward process that can be implemented by novice coders. It does not require the skills of a mobile app developer (Stewart, 2017), or a headset, like the Microsoft HoloLens (Microsoft, 2018). AR.js and A-Frame are open source software, not proprietary tools like ZapWorks (ZapWorks, 2018). Other open source development solutions for Web AR include argon.js (Argon.js, 2018), developed at the AEL (Augmented Environments) Lab at Georgia Tech. Argon also supports A-Frame (Aframe.argonjs.io, 2017), but requires learning to code in argon.js, a level of skill not needed when developing with AR.js and A-Frame. Working with AR.js, developers implement attributes in AR.js and utilize the A-Frame API to develop AR Web pages for use on desktop computers and mobile devices. AR markers are recognized and tracked using the camera, and the 3D content is positioned relative to this spatial information. In this session, a development process is demonstrated for working with AR.js and A-Frame. Web pages will be developed for use with AR markers, printed, and displayed on computer screens. 3D models will be created using A-Frame primitives and glTF 2.0 (GL Transmission Format) models. Online resources are provided for the all of the session content, underlying technologies, and the various implementations of AR.js.

In augmented reality applications and Web pages, markers are used to register 2D and 3D content, viewed in the application or browser, to real-world coordinates. Markers can be patterns or barcodes (Etienne, J., 2017b). A single marker can be used, or multiple markers can be combined to provide visual information for registration (Etienne, A., 2017). Developers can use existing markers that are supported by AR.js from ARToolkit; and, custom markers can be created (ARToolkit, 2016a). In this session, single printed markers will be demonstrated. Markers can also be presented as images on a computer screen; a separate display from the mobile device and browser with AR-enabled content, the marker can be read by the mobile device camera by aiming it at the screen. 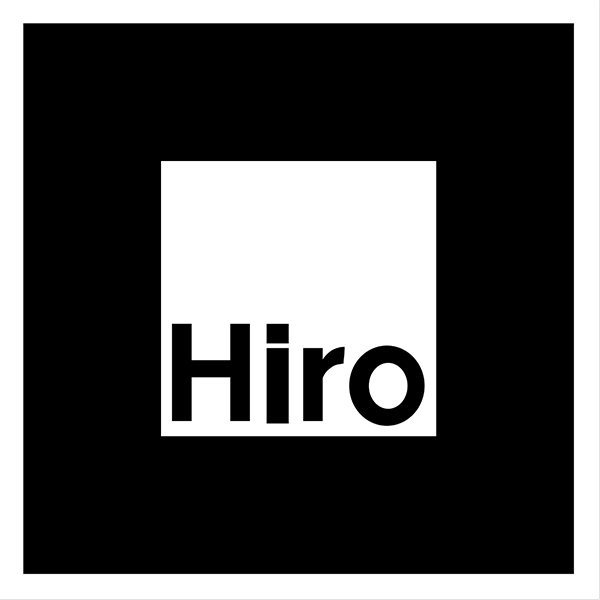 A-Frame is a Web framework for developing VR content. Created as an extension to three.js, A-Frame is built on HTML and includes components and tools that extend three.js and allow for the creation of 3D VR content with the inclusion of entities (objects), transformations, textures, and animation (A-Frame, 2015-2017b). For this session, examples of A-Frame with AR.js will focus on creating primitive 3D models in A-Frame, adding textures to these models, and animating them. The inclusion of glTF 2.0 models in A-Frame scenes is also shown. AR.js allows for accessing the camera and turning A-Frame VR content into AR content for the Web.

To begin developing an AR Web page with A-Frame and AR.js, first include the JavaScript libraries in the <head> tag of the .html page:

Note that the A-Frame JavaScript is the most current version, 0.7, and that the AR.js library is the version developed for use with A-Frame.

Following the basics for building a scene in A-Frame (A-Frame, 2015-2017e), https://aframe.io/docs/0.7.0/guides/building-a-basic-scene.html, start by adding the <a-scene> tag to the html code. This allows for the setup of the scene for various devices. Modify this tag with AR.js for A-Frame (Etienne, J., 2017a), https://github.com/jeromeetienne/AR.js/tree/master/aframe, by declaring the sourcceType attribute:

Inside the <a-scene> add entities (objects). These can include a box, cylinder, plane, or sphere. To include a box, declare the primitive as follows:

In this example the position, color and material components are also set. The position is set on the x,y, and z-axis relative to the AR marker viewed through the camera. Setting it at 0.5 on the y-axis will set the object’s origin above the marker in space. The color is set as HTML keywords or hexadecimal values. Measurement of size for objects in A-Frame scenes is in meters; scale is relative to this. Scale is set in x, y, and z dimensions. Rotation is also set on these three axes and measured in degrees. The opacity is a percentage expressed as a value from 0 to 1 and set in the material parameter. Full documentation for primitives and attributes is available on the A-Frame website, for example (A-Frame, 2015-2017d), https://aframe.io/docs/0.7.0/primitives/a-box.html.

From AR.js, set the AR marker, by adding the <a-marker-camera> entity. In this example, the preset parameter is set to the “hiro” marker:

Using the <a-marker-camera> entity causes the camera, not the object, to be transformed as perspective changes. 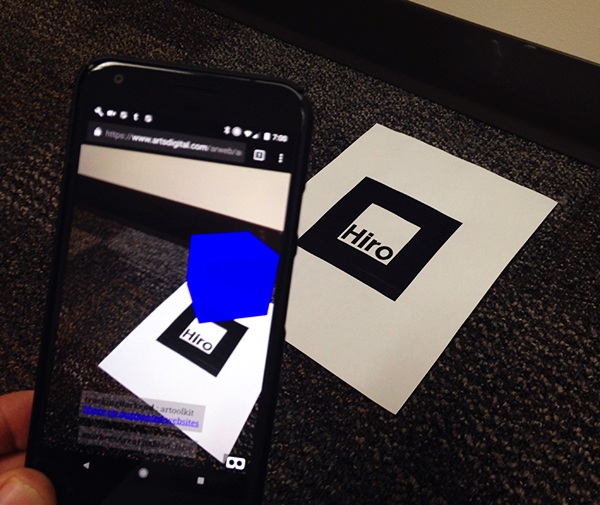 To add a texture to a primitive model in A-Frame, add an <a-asset> entity and create an img tag with id and source parameters, and add a source parameter to the primitive entity pointing to the ID, for example: 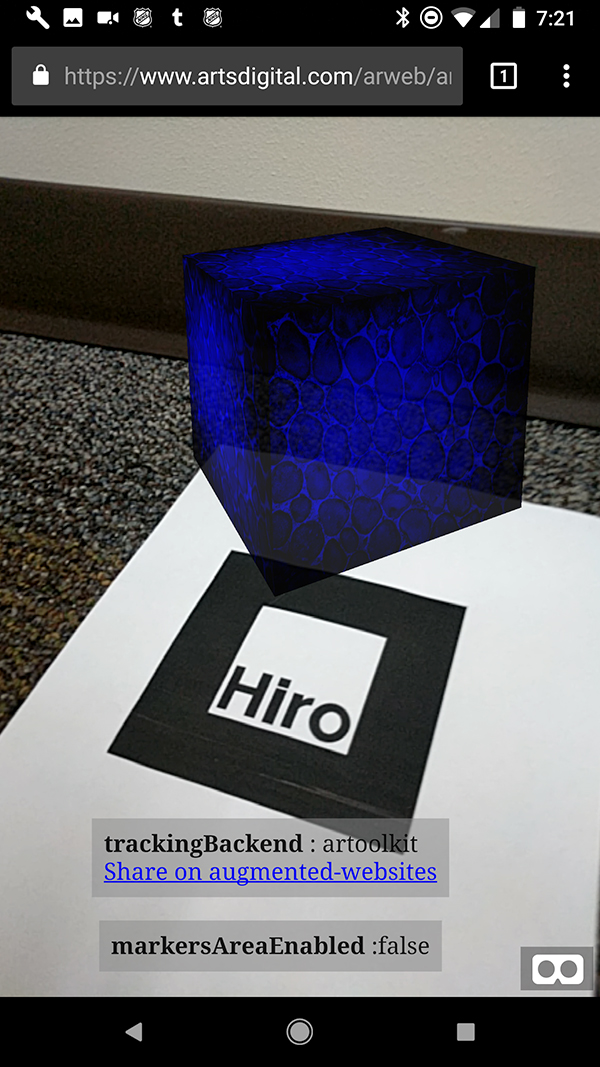 Animation is introduced by accessing the built-in animation system in A-Frame, referenced at (A-Frame, 2015-2017c) https://aframe.io/docs/0.7.0/core/animations.html. The <a-animation> element is added as a child of the model entity, for example:

In this example, the position is animated from its original position to the “to” xyz parameter setting. The duration is measured in milliseconds and the motion is set to an indefinite loop.

A-Frame allows for the inclusion of glTF 2.0 format models. Models can be downloaded from online sources (Sketchfab, 2017) (Khronos Group, 2018b), or created in 3D modeling software, for example, Blender, and exported to the glTF format (Khronos Group, 2018a). Examples showing the implementation of AR.js with A-Frame support of these models will be demonstrated in the session. An example of code for a scene with a glTF model with a printed “hiro” AR marker:

In the example, the model is located on the Web server in the same location as the html file that it is linked to. The <a-asset> entity is used, as in the primitive with texture map example, but, in this case, it is referencing the model directory which includes the model and all texture maps. The <a-gltf-model> entity is used to place the model in the scene. 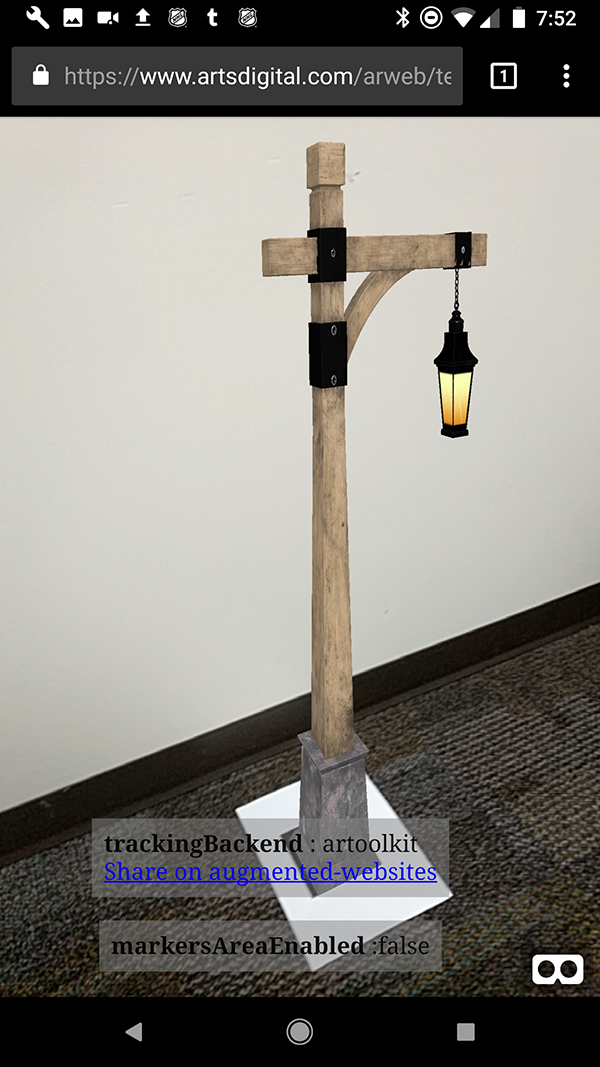